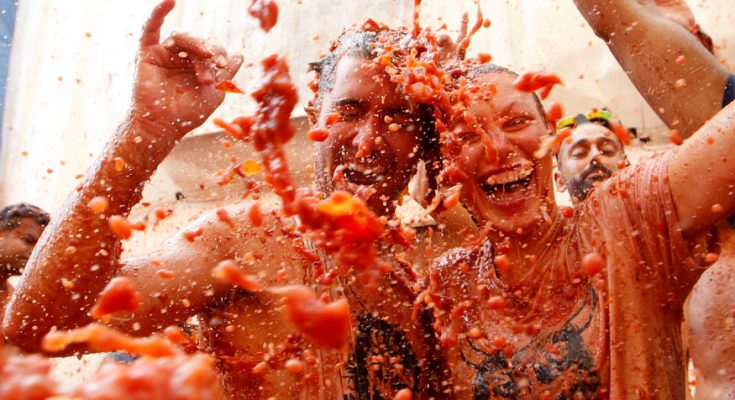 La Tomatina is the annual festival that happens annually every last Wednesday of August. This La Tomatina takes place in Bunol, it is a little village near Valencia, Spain. It is just 40 km from Valencia and can be reached by bus, train or car. Bunol is thinly populated with a population of 10,000 people. This colorful and messy festival involves thousands and thousands of overripe tomatoes which participants throw upon each other.It is the biggest food fight as it involves millions and millions of over- ripped tomatoes are thrown each other. Maximum capacity was 22,000 participants can take part in the festival. The participants must be 18 years old. 120 tons of tomatoes are thrown over each other in this food fight.This year will be the 74th anniversary of La Tomatina. In common language, this food fight is the Spanish version of Indian Holi. This food fight is biggest but at the same time, it is a harmless battle of tomatoes. There are numerous theories said to be behind the beginning of this messy worlds biggest food fight. The locals said that in the year 1945, a street fight broke during the somber street parade. In that fight, one rowdy started to throw vegetables from the nearby vegetable stall. The young group retaliated which resulted in a big fight. In the following year, the same last Wednesday of August the same group picked a fight on purpose at the same venue of Town Hall Square and brought their supply of tomatoes. The Police intervened to stop the fight the popularity of the tomatoes fight continued. It was banned till 1950, but the popularity of food fight lived back on the tradition and eventually, it was brought back.

Accommodation is scarce in the Bunol, as it is a small village in Spain. Visitors book cheap accommodation in Valencia then take a train to reach Bunyol on the day of the biggest food fight of the World. Valencia Central is only 40 km away from Bunol. There is no need for prior booking of trains as the journey is only for 50 minutes. Alternatively, tourists can opt for the bus or rental a car to reach Bunol.Bunol is the small thinly populated village, but during La Tomatina, the populations grow in the number of visitors landing to attend the festival. TheHotel Condes de Buolis a nice little hotel in the town center but there is hardly any accommodation in the immediate area so most budget visitors stay in abudget hostel or hotel in Valenciabut youll need to book well in advance.Another option for tourist accommodation includes a small family-run campsite called La Granjita in Chiva which is only 10km north-east of Bunol. The owners provide tents, bedsheets, towels as well as evening breakfast on demand of tourists is also available. Earlier the Tomatina festival was manageable but as the popularity is increasing each year. The tickets are available online. Due to security reasons, the town Council of Bunyol has been forced to limit numbers by issuing tickets to those wishing to take part. Tickets cost 10 each and can be reserved and printed out on theBunyol Town Council website. Alternatively, you canbook an organized tour to La Tomatinawith numerous companies who will include tickets in their package.

What to wear for La Tomatina

The majority of the participants try to wear white T-shirts. White is preferred because of the heat. Some participants feel that white displays the real color of tomatoes thrown over them. Plenty of people wear swimming goggles or snorkeling gear to keep the pure out of their eyes and nose. The world's biggest food fight had certain rules and regulations which must be followed by the participants to have full enjoyment of this messy and colorful festival.Carrying a bottle or any object that can cause an accident is considered to be illegal for participants of La Tomatina.You must not tear the clothes.Before throwing tomatoes make sure that they are crushed so that it can not hurt anybody.You must be careful to avoid the lorries which carry the tomatoes.As soon as the participants hear the second banger they must stop throwing the tomatoes.

Read more:10 perfect destinations around the world to go Skydiving!

La Tomatina is the perfect display of how crazy and wacky the Spanish festivals are. Among the other festivals, La Tomatina is the wackiest of all Spanish festivals. So, this year depart yourself to Bunol and get immersed in the river of tomato juice, as people from various parts of the World, throw over-ripe tomatoes at each other in this state-sanctioned food fight. Every year the last Wednesday of August the small town of Bunol in Valencia prepares to get messy and welcomes a huge number of tourists to become the part of Worlds biggest food fight. Read more:Europe backpacking trip guide for Indian travelers!!