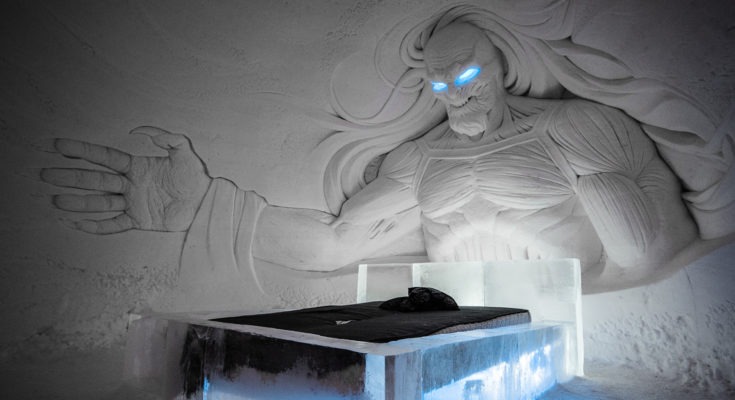 The First Game of Thrones - themed ice hotel in the world

Time and again hospitality is leaving us wide-eyed with its creativity and amazing ideas. This time Lapland in Finland has opened its first Game of Thrones-themed ice hotel in the world. Almost 99 out of 100 individuals die heart fan of every series of Game of Thrones. Now this time the crazy fans of Game of Thrones will get the golden opportunity to live with their characters, which they have seen only on screen. They can touch the ice images of the characters inside the Game of Thrones themed ice hotel in the world. So be ready to go face to face with a White Walker or snuggle with Jon and Dany.Read more:-Worlds First Underwater Villa In Maldives

Lapland Hotels Snow village in northern Finland has opened its very own Game of Thrones-themed ice hotel, complete with ice-carvings of the shows best settings and sigils. It is located in the resort town Kittila, 200 km north of Arctic Circle. SnowVillage is a short transfer from Kittil airport which is a 90-minute flight from the capital, Helsinki. This snow village is constructed every year. This year the theme of this ice hotel is related to Game of Thrones. It is constructed every year, once the temperature drops below 10 C. it generally constructed at the end of October or early November. This ice wonderland themed of Game of Thrones is spread over 20, 000 square meters.For the 2017-2018 season, the snow village hotel teamed up with HBO Nordic to create the Game of Thrones theme. Lots of ice sculptors around the globe are invited to construct and design the rooms of the ice-themed hotel. The hotel and everything inside is carved of the snow and ice only. Like every hotel, this hotel too has a restaurant, beds, chapel, bar but all are made of snow and this is the most distinctive feature of this ice-themed hotel.The 30-room hotel has been sculpted and carved from 20 million kilos of snow and 350,000 kilos of crystal clear natural ice.Earlier the Snow village use to draw themes from the surrounding nature, this is the first time when they have chosen Game of Thrones as their theme. Nearly for eight years, Ned Stark has uttered the phrase Winter is coming. And this winter gets the privilege to be face to face with him. The Snow Village took just five weeks to build the first Game of Thrones themed ice hotel in the World.This year's Game of Thrones themed snow suites were designed by professional ice sculptors from Russia, Ukraine, Poland, Latvia, Lithuania and Finlandand their kind of incredible.The first Game of Thrones themed ice hotel is equipped with Sept of Baelor, an iron throne, and a very natural looking dragon. Also seen in the rooms are replicas of the Iron Throne guarded by The Mountain, and a mammoth-sized blue-eyed White Walker over a bed.The temperature inside the ice hotel is 23 degrees Fahrenheit. In order to keep guests warm, the hotel provides high-quality warm sleeping bags and fleece lining bags keep them warm.In the morning, guests are served with hot berry juice, so that their blood gets flowing.The hotel recommends that overnight visitors stay just one night in the igloo and enjoy the rest of their stay in one of the cozy cabins nearby. This year Snow Village will host 25 to 30 weddings. This information was shared by the team of Snow Village. The wedding chapel is also made up of ice.The Snow Village offers a theatre, completely carved out of ice, where guests can enjoy short movies depicting how the entire first Game of Thrones themed ice hotel was built.To make sure that the ice sculptors may not get melt around you, the temperature is maintained between 2-5 degree Celsius.The lip-smacking three-course meal can be enjoyed by the guests in the Ice Restaurant. The local staple like reindeer and arctic char is on the menu. The furniture of the restaurant is made up of ice.Wine lovers can enjoy a bar, which is carved out of snow, even the glasses in which wine is served are made up of ice. The popular drink served at Ice Bar is vodka shot.The Snow village has opened its first Game of Thrones themed hotel on 8 April 2018, with standard double rooms starting from 220 (around $270) and snow suites from 294 (around $360). So this vacation the fans of Games of Thrones are requested to depart themselves to Finland and enjoy their favorite character in reality. Their dream has got wings with the opening of the first Game of Throne ice-themed hotel in the world. The guests can really immerse yourself into the Game of Throne experience here, as there are life-size statues and a frozen version of Braavos' Hall of Faces, which included a full-size iron throne to sit in. Other character sculptures in the room include the Night King and Wun Wun. And if you want to have a meta tag of Game of Thrones fan, then get married at the ice chapel located at the first Game of Thrones themed ice hotel in the world.Read more:-GIETHOORN: The Village Without Roads