International Jan-13-2021 by admin.ngtraveller
When you get the Northern Lights demonstrated by advanced physicists, you probably won't get it.
But this phenomenon can also be explained in a tangible way: we have the sun to thank for everything, just like the aurora, and during large solar flares, massive amounts of particles are thrown from the Sun into deep space.

This is where it gets really interesting: When the particles meet the Earth's magnetic shield, they head into an ellipse around the magnetic north pole while interacting with the upper parts of the atmosphere, the ozone and oxygen layers, and other things that protect the Earth. The energy that is released is sent to us in the form of northern lights.
It adds to the magic knowing that this performance takes place almost 100 kilometers above our heads. Its tremendous power is the reason we can see it so clearly, as countless atoms and molecules help it.
But don't take the Northern Lights for granted. It is a natural phenomenon like the weather. Its appearance and intensity are controlled by the activity of the Sun and its location depends on the Earth's magnetic field.
The northern lights appear in a belt or oval that is on the earth in a regular position with respect to the sun. The lights are usually visible over northern mainland Norway at night and over Svalbard during the day. When solar activity increases, the Northern Lights can also be seen in southern Norway.

Where is the best place to see the Northern Lights in Norway?

There are some privileged places to discover the Northern Lights in Norway, and they are:

When is the best time to see the Northern Lights in Norway?

In the months between September and March. During the summer months, there is almost constant daylight, and the north is famous for the "midnight sun", so even if the northern lights came out to play, you would not see it.

Total darkness and the absence of light pollution are essential to seeing the Northern Lights in all their glory, so stay in smaller cities for a good chance to see them. 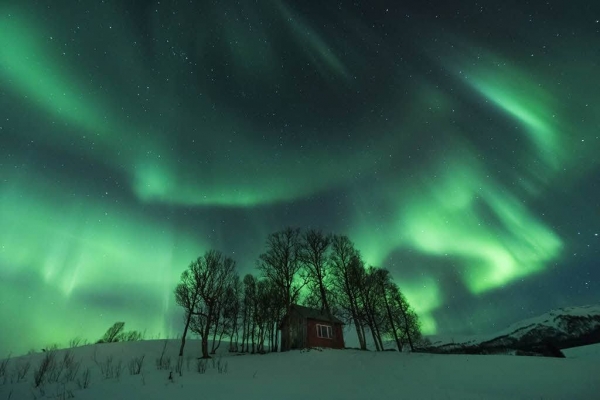 How to photograph the Northern Lights?

1. Stay away from lights

No, not the northern lights, but the city lights. If you're too close to them, your photos won't be as good. Find a good location away from the city center. Your chances of getting the perfect Instagram photo can be dramatically increased if you join a local Northern Lights guide who knows the best places to look. However, do not use the flash when taking pictures.

Remember to check the weather forecast (you want a clear sky) and the northern lights forecast (to know when to dance). Imagine sitting by the fire with a hot cup of coffee, ready to witness the greatest light show on Earth; then the sky starts to rain. Not your idea of a perfect evening, is it? Again, it would be wise to join a guided tour of the Northern Lights - the guides always know the local weather conditions first hand.

3. You are in the Arctic: wear warm clothes

Winters in northern Norway are cold. Shaking hands and frozen fingers won't help when you want a good photo, so finish with several layers of clothing. It doesn't matter if this makes you look like the chubby cousin of a Michelin man - Twilight will be the star of your photo anyway.

You could call blurry images artistic, but I guess that's not what you want here. Use a tripod, and your photos are unlikely to appear taken after very few craft beers. If you don't have a tripod, find a large rock, hood, or something else to keep the camera stationary. A remote release or cable release can also be helpful.

5. Use manual settings if you have them

Yes, automatic settings make life easier, but they're not your friend when it gets dark. In the worst case, the Northern Lights won't appear in your photo at all!
The appropriate camera settings for Northern Lights photography vary with time and place, and from the camera to camera. However, manual settings are always the best. Allows you to set focus, shutter speed, ISO, and aperture. A good tip is to familiarize yourself with your camera settings before you travel to increase your chances of getting this fantastic sunset shot.

Wondering how to take photos of the Northern Lights with a smartphone? The results will not be the same, but don't worry. You can still get a good shot if you download an app that helps you change your camera's shutter speed. Or maybe your phone has artificial intelligence to help you get good night photos.
The best conditions for photographing the Northern Lights in Norway on your phone are the bright moon and twilight, with colors so strong they almost throw you off balance.

7. Make the Northern Lights a part of your image, not the only thing in it

People often point the camera at the sky. Aurora is a beauty and that is understandable. But you need more to create the right feel in your image.
The stunning landscapes of Northern Lights Norway are perfect! Put a mountain in the background. Add a beach or campfire in front. Then last but not least, leave room for the Northern Lights at the top and wait patiently for it to show. Therefore, the best lens for photographing the Northern Lights is a wide-angle lens. So, voila, you have a chance to win!

Also Read:  What is Auroville and Things to do in Auroville, The city of dawn