Everything you need to know about the Silk Road

The Silk Road is an ancient trade route that is well-connected and an organized network of roads. This network of roads was a route that connected the East, West and South Asia. This route is known as “the silk road” since ancient times. The route was started from the Far Eastside, from where China used to sell their silk.

When it was found out by the Western people that some people had been transferring the culture, civilization as well as the newest products through this route from the Eastern countries to the Western ones, then they had named the road “the Silk Road”. Currently, it has been discovered that the Silk Route is around 1700 years old.

THE ROUTE OF THE NEW SILK ROAD

The Silk Road is divided into two routes. One route is through the land and the one route is through the seas. As per the map, it is found that the "New Silk Road" that is based on land, will start in the Xi’an located in central China region. After this, the route stretches to the west passing through Lanzhou (Gansu province), Urumqi (Xinjiang), and Khorgas (Xinjiang), which is close to the border with Kazakhstan. After this, the route of the Silk Road runs southwest from the Central Asia region to northern Iran to the countries of Syria, Turkey, and eventually moves to North-Western Europe. When the land route of the silk route reaches the North-western Europe region, it meets up with the Maritime Silk Road.

The Maritime Silk Road will start in the Quanzhou in Fujian province of China and will go through Guangzhou (Guangdong province), Beihai (Guangxi), and Haikou (Hainan) before going south to the Malacca Strait. Further, from Kuala Lumpur, the Maritime Silk Road will reach Kolkata in India and will be crossing the rest of the Indian Ocean heading to Nairobi in Kenya and then to the Horn of Africa. After this, it will move through the Red Sea into the Mediterranean and eventually join the Silk Road based on Land. 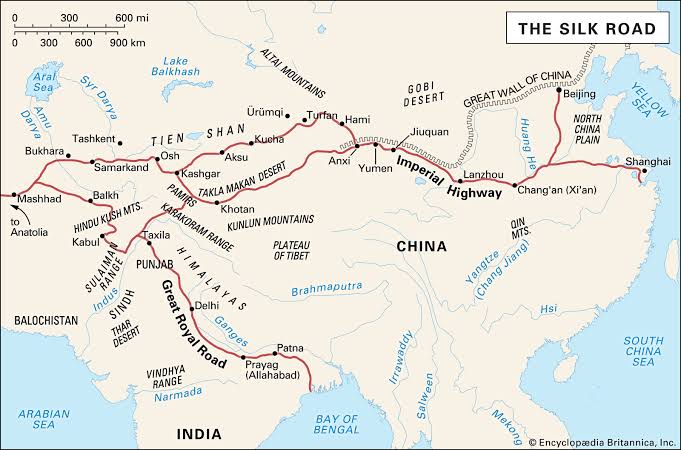 As per the ancient maps, the Silk Road had begun from Huang City in China moving up to Turkestan. After this, the route of the silk road had passed through central Asia reaching Samarqand and Bukhara. After entering Iran, the route was passed through the northern part of Iran passing through Merv, Sarakhs, Nishapur, Gorgan, Baam, Safiabad, Ray, Qazvin, Zanjan and the north of Hamadan. Then, the route ended at one of the harbors in the country of Syria after it had passed through Yerevan.

Silk was the most traded product of this route and hence the name "the Silk Road."

Many other products were also traded through this route. Also, the trading activities that took place on this route had also increased because of the ease of transporting on the route. Various goods such as woolen clothes, carpets, curtains, blankets, and rugs used to be exported to China through the Mediterranean region. Other items that had been exported to China include camels that were exported through the Central Asian region, military equipment, gold and silver, semi-precious stones and glass items, etc.

On the other hand, China used to export porcelain, popular Chinese china such as the snow-white vases, bowls, glasses, and dishes with beautiful patterns, Chinese varnish, medicines, and perfumes.

India exported its famous fabrics, spices and semi-precious stones, dyes, and ivory. Iran was famous for its silver products. Rome used to import the spices, fragrances, jewels, ivory, and sugar and then, exported the European photos as well as other luxury goods.

THE HISTORY OF THE SILK ROAD 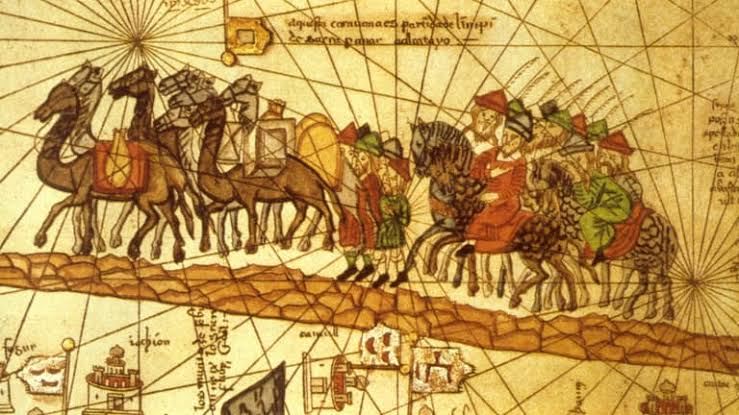 The Silk Road had started flourishing during the Sasanian era. The empire had earned its wealth as a result of exchanging the products for buying silk through this route. Many traders had been engaged in the export and import of various kinds of goods such as a variety of carpets, precious stones, and gems, fabrics, spices, as well as all types of high-consumption products through the ancient silk route. The largest source of income for the Sassanian Empire has been receiving the custom duties and the taxes from the caravans on the route.

According to the ancient books and the various stories that had been heard about the Silk Road, the Byzantine Empire and the Romans had tried a lot to boost their exporting and importing to enhance their empire. To be able to exchange the products through the ancient silk route, many wars have been fought between the Iranians and the Romans and many others as well.

After a while, Some of the great Empires had decided to increase their trading activities with China through the Silk Route. As a result, the empires decided to import silk from China directly using the trading ships of Ethiopia passing the Indian Ocean. At the same time, the Iranians used to close the ship routes in Yemen, the Red Sea, and the Indian Ocean. As a result of which, the efforts of the Western region to have the silk road under their control have failed.

THE REASONS BEHIND THE DESTRUCTION OF THE SILK ROAD

Apart from the fact that trading in ancient times had been increasing because of the Silk Road Route. As a result, many of the merchants and traders were able to gain a reputation. However, businesses could not last. A few centuries later, usage along this ancient silk route had decreased little by little and now, no trade happens along this route and the only thing left is the name 'the Silk Road'.

There are some factors that led to the destruction of the Silk Road.

With the emergence of the new technologies, many people had started to produce certain commodities such as the goods that were imported through the Silk Route in earlier times.  Because of this, many businesses closed down gradually. The Silk Road was no longer used due to the technological innovations in the transportation sector as a result of which affordable vehicles could be made and bought.

Gradually, the trading of silk had slowed down as new valuable products had been introduced by some countries. These products included tea etc. Another reason for the decline of the silk road was the amazing progress in the sector of transportation particularly, the railway sector that helped to connect the various locations in the former Soviet Union region.

Lastly, another reason for the losing popularity of the Silk Road was that there was no security, as well as the various changes in the policies of the countries, wars, and several bandits.

The SILK ROAD AND INDIA

Even though the silk road had declined in terms of trade but many countries had considered it as an interesting route for the tourists and travelers. For instance, the Chinese people have been planning to develop tourism at this ancient route.

China has decided to achieve its economic progress through outsourcing activities such as the outsourcing of manufacturing to other Silk Route countries. When it comes to India, there is an advantage due to the lower cost of labor comparatively as well as the raw material. Hence, there is an opportunity to strengthen the manufacturing base of India and publicize the ‘Make in India’ campaign, and as a result help in generating new employment opportunities.

If New Delhi decides to not be a part of the  Maritime Silk Road (MSR), then the country's industrial growth will be affected. Hence, it will end up affecting the economic growth of India as well as the development plans.

The Maritime Silk Road could provide an alternate and effective maritime supplement route to the already established land-based Bangladesh-China-India-Myanmar (BCIM) Economic Corridor that is under the active consideration by India.

India’s ‘Sagarmala’ project if we decide to integrate it into the Maritime Silk Road. It may end up contributing to the country's many initiatives aimed at enhancing the sea-trade connectivity, as well as port-led development of the hinterland, and the SEZs.

Also read:- Check out these Top things to do in Hong Kong