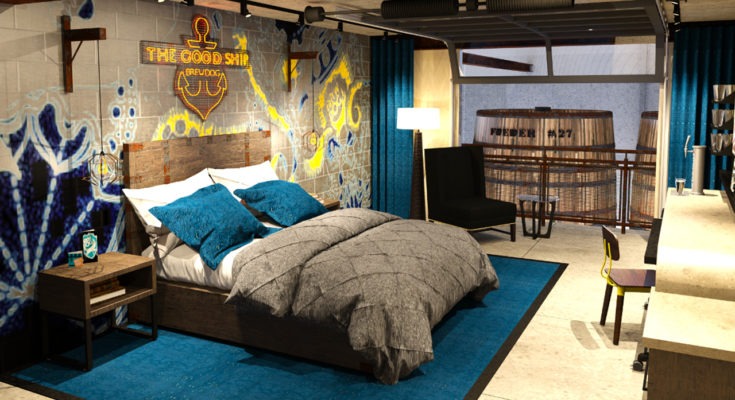 Stay At This Beer-Themed Hotel Inside A Brewery

Cover Stories Feb-20-2019 by bhavya
Beer and vacation are always seen as a perfect symbiosis to each other. So beer lovers who are seeking unparallel experience and unlimited fun can head towards Colombus, Ohio. Brew Dog is a beer company based in Scotland. The BrewDog has to offer something new and that is Beer Themed hotel in Columbus, Ohio. DogHouse is the first beer-themed hotel in the world. It was opened by a James Watt. He is the founder and CEO of BrewDog. Dog House is located at a 42-acre site in Canal Winchester, a city near Colombus, Ohio.Also read:-10 best vacation cities for beer lovers

James Watt is the CEO and Co-Founder of Brew Dog, he said people will forget Disneyland as there will be one more happiest place on the earth and that is a beer-themed hotel. It is mentioned on the companys Website that beer-themed hotel was a Passion Project. James Watt said that designing the Beer Themed Hotel was an incredible experience for him. He admits that the project was very ambitious but the company has gone through obstacles in order to complete the project. As the biggest question was Can the successful brewery transition further into the hospitality industry?

In answer to the biggest question, James Watt said :

Weve been innovating and expanding at a rapid rate since the company started in 2007. We set up our own bar in Aberdeen, Scotland back in 2010 when the prevailing wisdom was that we were much too small to move into hospitality. 50 plus bars later, weve well and truly proven the naysayers wrong. Currently, we have a team of more than 1,000 amazing staff working in our breweries and bars across four continents. Well be bringing in the best hoteliers and utilizing our existing hospitality industry experience to ensure were providing the best service in the industry. The crowdfunding campaign first launched on Indiegogo in 2017, it had earned more than $324,000more than four times the original goal. Surely the earning was beyond the expectation as the beer lovers have showered the unbelievable love to the Crowdfunding Campaign.In August 2017 when the BrewDogs old business approach was decided to forego by the company and they came up with the challenges, to ensure the best hospitality, they started with explosive ideas of Crowdfunding Campaign. The equity raised by the crowdfunding Campaign was record-breaking. Aside from raising 16 million (approximately $21 million) in the fifth round.Also read:-Swedish Hotel: That Melts into the river every spring

BrewDog is owned by more than 80,000 investors known as Equity Punks. Those investors get priority booking and discounts. These investors are core beer lovers who had invested in this beer-themed hotel (Dog House).The Brew Dog announced in March of last year (2018) that it would be opening the worlds first crowdfunded craft beer hotel located inside its brewery. The hotel boasts 32 guest room including eight suites, many of which will overlook the brewing facility and workers below. Guests can watch the brewers work.Each room is having a mini-fridge stocked with Brew Dog beer.Travelers will get spa using beer-themed ingredients such as malt facials, hop scrubs, and beer baths. Even the personal products are beer-themed and include a line of hop-infused soaps.Each room is having an in-room beer tap. The in-room taps filled with seasonal BrewDog beer.All rooms have a view of the brewery.Each room has in-shower refrigerators full of Brew Dog beer.Equity Punk investors are liable to get priority bookings for The Dog House.The first Beer Themed hotel features a lobby bar with games and activities.As the name suggests (The Dog House), this beer-themed hotel is Dogs friendly. Even a dog park, which is easily accessible from its four dog-friendly guest rooms.A hotel is having luxury suites with a hot tub. These hot tubs are filled with IPA (IPA is beer from Brew Dog brand itself).Craft-beer pairings during breakfast, lunch, and dinner.In addition to these in-room perks, the guests will be attended by the bartender when they will check in.At the time of checking into, The Dog House the guests will get a complimentary beer.Guests can enjoy International continental breakfast. It is offered daily by the Dogs House. There is a marketplace for taking way food facilities.On-site amenities include large common areas and a front patio to relax, ping (or, let's be real, beer) pong tables, a media room, state of the art fitness center.BrewDog has also unveiled its on-site, interactive beer museum. This 6,000 square-foot space provides a journey through the brewing process, a deep dive into the history of craft beer, and hands-on experience of the fundamental four ingredients that contribute to the creation of a craft beer.Also read:-Santiago de Compostela travelTitled as the world's first hotel inside of a brewery. The beer-themed hotel is the much-anticipated project from the Scottish-based beer brand BrewDog. If you consider yourself a craft beer passionate soul, you've probably already heard about it. Now, Brew Dogs Dog House outside of Columbus, Ohio is finally opened to the public. The DogHouse is a Mecca for those craft beer fanatics seeking a vacation with a difference. Given the companys mission has always been to make others as passionate about craft beer as they are, a hotel that celebrates all things beer is a natural expression of this goal. Drinking and vacation are in a committed relationship but none other concept has rarely depicted this intimacy as Dog House (craft beer-themed hotel,) has done from 27 August 2018. From welcome drink to beer showers, beer tap.. this beer-themed hotel is a beer paradise from check in to check out. An ultimate experience for the beer lovers.

In the press release the CEO and CO-Founder of Dog House James Watt Said:"The DogHouse is our gift to the passionate and dedicated army of beer fans that have supported us every step of the way. We are nothing without our community and this hotel celebrates that.This year 2019 BrewDog is moving forward with plans to launch its first craft beer-themed hotel in the UK.Also read:-Unfold Beauty And Adventure Of Five Unreal Hotel Rooms Around The World