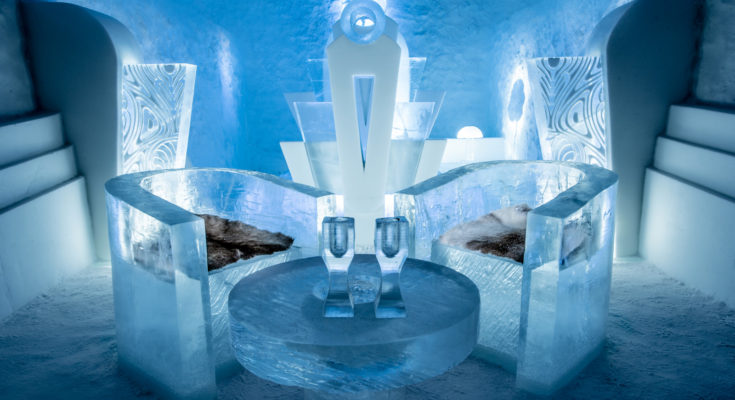 Swedish Hotel: That Melts into the river every spring

The title itself is quite interesting and it connotes lots of several questions in our mind. How a hotel can melt ?? the incredible hotel that melts every year is situated in the village of Jukkasjrvi, in northern Sweden. The world of hospitality has given a unique concept of ice hotel. This hotel is regenerated every winter and in spring season it melts down, as the temperature increases. The ice hotel is again back in the next following winter season. This unique ice hotel is located in the Arctic Circle, on the bank of River Torne. River Torne is the largest river in Sweden. The ice hotel is entirely built from the ice of river Torne. The Swedish ice hotel is spread over 2,100 square meters, is reshaped each year with new artists designing the rooms.The ice hotel in Sweden was opened in the year 1989. After its opening, the hotel was rebuilt every year during the winters (from December to April). Each spring that is around March the Ice Hotel in Sweden harvests almost 900 t (990 short tons) of ice and 27,000 t (30,000 short tons) of snow from the frozen river Throne and stored it in the production house. The ice is used for creating ice bar designs and glasses and snow is used to build the strong structure of ice hotel.Also read:-Unfold Beauty And Adventure Of Five Unreal Hotel Rooms Around The World

The hotel began in 1990 when French artist Jannot Derid held an exhibition in a cylinder-shaped igloo in the area. One night, there were no rooms available in the town, so some visitors slept in sleeping bags on top of reindeer skin, beginning the worlds first ice hotel. Special features of the ice hotel in Sweden

The ice hotel in Sweden is the first ice hotel in the world. The 30,000-square-foot hotel is located 200km north of the Arctic Circle and features an Absolut Vodka ice bar, an ice cinema, an ice chapel, ice family rooms, and ice suites. The whole structure uses 4,000 tons of ice.The structure remains below freezing, around 5 C (23 F). Like other hotels, it has chairs, beds but the unique feature is all are made up of snow. In 1990 when it was opened, the ice hotel featured a hall, a Church, a reception area and around 100 rooms for accommodation. Since 2016, the hotel also features a permanent structure open all year round, cooled by solar panels during the warmer months. This new addition, ICEHOTEL 365, has 10 luxury suites, 12 art suites designed by selected artists, an ice bar and gallery, all run on solar power.Also read:-Luxury Boutique Hotels in LondonICEHOTEL 365 is a permanent structure that includes luxury suites, each with sauna and bathroom, and art suites, all sculptured by selected artists. There is an excellent hostel close to the hotel. At the entrance of the hotel, a bar is also provided for drink lovers. It is named as Absolut Icebar. The Absolut Icebar was opened in the year 1994. For the first time, the travelers were served vodka in the glass made up of ice, often described as the drink in the rocks. The entire hotel even the glasses of the bar are made up of ice. The ice Suites of the Ice Hotel do not have bathroom facilities but the guests are provided bathroom facilities in the warm building near the ice hotel. Warm accommodations are also offered next to the ice hotels in Sweden. The most unparallel view is the view of rooms in the ice hotel. Each rooms architecture and design varies from each other and its unique and different year because of regeneration of hotels again in the following winters. None of the two rooms are the same. The hotel's thick walls, ceilings, and even floor all are made up of ice. Another incredible feature of the ice hotel in Sweden is they even have an ice restaurant too.You might be wondering how one can sleep in ice hotels. Yes, that is quite a common question to ask. In ice hotels the beds and fittings, decorations are even carved out of ice. So the bed is bedded with reindeer furs to keep the guests warm and the guests sleep in polar tested sleeping warms and enjoy the cozy warm sleep. There is no heating element around the rooms and the temperature remains below the freezing point. Plumbing is prohibited in ice hotels due to its structure but the ice hotels in Sweden provides Sauna facilities too. Sauna is carried out in the premises of the ice hotel with hot tub outdoors.Also read:-10 best vacation cities for beer lovers

With the cooperation of the Ice hotels in Sweden, the ice Church is also run as regular Churches in Sweden. During Christmas, the charm of the Ice Church is at its peak with full Christmas decoration. More than 150 couples every year during winters get married in the Ice Church and around 20 children are baptized. The ice chapel wedding is characterized by cold, the stillness and a cappella singing.

The life cycle of Swedish Ice Hotel is regenerated every winter season. The ice hotels melt every Spring due to rise in temperature. Every year the ice hotel of Sweden receives the applications from artists from different parts of the world for the immense creative work of designing the ice hotel and its unparallel architecture. In 2013, more than 200 applications were received from different corners of the world. The artist submits their applications for different segments of ice hotel including theatre, structural design, camerawork, and interior design. The artists start their work from November each year. During mid-November when the temperature drops the building process of ice hotel begins. The ice hotels open in phases. The first phase is opened at the beginning of December and for each week the other section is opened for guests until the beginning of January when the construction is completed.Also read:-The best holiday cocktails from around the world

In the winter, expect to pay around 1,600 SEK per night for a standard warm room and 4,000 SEK per night for a standard cold room. Suites will cost between 5,500-8,100 SEK per night depending on how fancy you want to get. Deluxe suites even have direct access to the sauna, although the regular suites also access to the sauna.Free Wi-Fi. The ice hotel is best suited for adults only as the family stay is a little bit harder with young children due to freezing temperature. Disabled guests are prohibited in the Ice Hotel of Sweden. As the Ice Hotels are operated during winters only, so to get experienced staff is quite challenging for the hotel administration. But the young, enthusiastic and kind team members of Swedish Ice Hotel is bliss for guests. The guests can have the incredible experience of husky sledding, snowmobiling, ice driving, cross-country skiing and more in the surrounding region, but they need to pay the supplementary rates for such services. The ice hotel provides Wi-Fi services, restaurant, sauna, and the most unforgettable ice bar services. Guests can dine at either the Homestead or main Ice hotel restaurant, while excursions often include basic snacks or lunches perhaps a cinnamon roll or slices of pork heated over an open fire. The quality, generally, is fine and the ice menu at the main restaurant, where inventive dishes are served on blocks of ice.

Guided Tour- travelers can take the guides and enjoy the short stories related to the past of the Swedish ice Hotel. Can roam through the Swedish Ice hotel rooms having different intricate designs.Ice Sculpting- Guests at the Swedish Ice Hotel can enjoy the ice sculpting classes. The cost of ice sculpting classes IS 745 SEK per person and the class is around for 2.5 hours.Snowmobiling- the most exciting trip through snow is the snowmobiling. Guests can have a fun way to see the arctic tundra as you cruise through the snow drifts. It is available from December to April. The trip lasts for a couple of hours and charges 995 SEK per person.Wildlife Safari- Travelers can hop on a snowmobile and head towards the tundra to spot the moose., reindeer and incredible natural scenery. Cameras are must be needed to capture beauty. The tour costs 2750 SEK per person. The timings for wildlife safari is from 9:AM-3: PM.Reindeer Hangout- Guests can enjoy the experience of traditional Sami (Indigenous people in Sweden) lifestyle. Feed their reindeer and learn about their rich culture and traditions. The tour takes 3 hours and charges 2,000 SEK per person. Tours are available from November to April.Moose Safari on Horseback- The tour will take the travelers around the Tundra on horseback in search of Swedish Moose. It is a full day activity and the tour is available from December To March. The travelers might see the other wildlife like foxes, hares too. The charges for a tour is 2100 SEK Per Person.Also read:-Indian Restaurants in Abu Dhabi

The flight from Stockholm Arlanda to Kiruna takes only 90 minutes and by train, you can reach in just 12 hours. Kiruna Airport and Kiruna railway station are just 15-20 minutes away from ICEHOTEL. In winters there are direct Charter flights from Heathrow London that will take you to ICEHOTEL in just 3 hours.The other way to go to Swedish Ice Hotel is by Car. Drive through Swedish Lapland and travel to ICEHOTEL at your own pace. Follow Torne River north for the scenic route and stop at ICEHOTEL, which is situated on the riverbank, or find your way down from mountains and fjords to the valley around Jukkasjrvi. The parking area has engine heaters that are highly recommended to use as the temperature drops to zero. While traveling by road travelers can get the view of moose, reindeer, hares and big forest birds that roam the roads.The next option for traveling to the Swedish Ice hotel is, travelers who love to explore can go there by train. You can also choose the night train for an extra comfortable tour. The train from Stockholm takes around 12 hours, depending on what departure time and route you choose. You can also get to ICEHOTEL by train from Narvik (Norway) or Lule (Sweden). While traveling by train travelers can explore the landscape beauty of Sweden.Every year when we all plan to travel we often get anxious for the accommodation, so this time when you plan a unique accommodation try out the Swedish Ice hotel. The ultimate experience of the unique style of hospitality in the world.Also read:-Worlds Largest Underwater Restaurant in Norway