The Waste to Wonders park is a new addition to Delhi's attractions. This is the perfect place where you will find how they have utilized the wastes and created something amazing. When you visit the park, you will find that there are the replicas of the seven wonders of the world, that are 100% made up of the wastes collected by the city authorities.

The theme of the park has received praise from everywhere. There are the sculptures/replicas of the seven wonders of the world including the Taj Mahal of India (20ft), the Great Pyramid of Giza (18 ft), the Eiffel Tower of Paris (60 ft), the Leaning Tower of Pisa in Italy (25ft), the Christ the Redeemer Statue of Rio De Janeiro, Brazil (25 ft), Rome's Colosseum (15 ft) and the Statute of Liberty of New York (30 ft).

The Park will stay open from 10 AM to 10 PM every day. The park stays closed on a Monday.

These replicas of the most iconic monuments of the World are simply created from Industrial wastes as well as other wastes. It is a One of its kind park in the whole world.  People come here often whether it is to click a selfie with the Replica of the Eiffel Tower or to simply check out this amazing place. It is worth visiting at least once with family or friends. Take your kids to the park and tell them about the seven wonders. Around 150 tonnes of waste products such as the scrap iron, waste automobile parts, broken utensils of metal as well as pipes have been used to create this super cool park.

A fun fact to know about the park is that the idea to create such a park had been taken from the Seven Wonders Park in Kota which had been featured in the Bollywood movie "Badrinath ki Dulhania". Morning joggers and people who exercise in the morning often come here for their daily exercise. The South Delhi Municipal Corporation (SDMC) has successfully lightened up the park by harnessing the wind and solar energy that has helped give a breathtakingly beautiful view of there sculptures during the sunset and night time.

The waste to Wonders park is something that should be visiting to check out for yourself how something so amazing can be created using the waste products. The SDMC has been planning to introduce a light and sound show at the park which will make it one of the best attractions the city has got. There are also plans to allow prewedding as well as the shooting of films at this park. The costs involved in building this themed park have been approximately Rs 7.5 crore.

The seven structures have been installed in the landscaped park. The Eiffel Tower is the famous monument of Paris in France and it the tallest of all the other structures that have been installed in the park. Also, the Taj Mahal has been created out of industrial wastes as well as the other waste, such as used chains of cycles, and the motifs that are drawn on it have been carved out using the laser-cut technology, that stands out.

This Park and its super eco-friendly theme will definitely give a boost to the 'Swachh Bharat Abhiyan' movement and will help India in moving ahead towards the transformation of the waste products into something useful. Mr P K Goel, the Commissioner of the SDMC said in a statement that around 150 tonnes of scraps and waste products such as used metals and pipes, etc. have been used to create the "architectural wonders for the city." The Commissioner also claimed that this is the World's only such park that has all the seven wonders of the World which been replicated using tonnes of waste products.

The park is an eco-friendly park as it has 3 windmills that are worth 1 KW of power, three solar trees that are worth 5 KW of power as well as the Solar Panel on the Rooftop that is worth 10 KW of power. It is good to know that the SDMC made the park self-sufficient to be able to run on renewable energy generated using these windmills and solar panels.

We have complete information about the replicas of the seven wonders of the world given as follows: 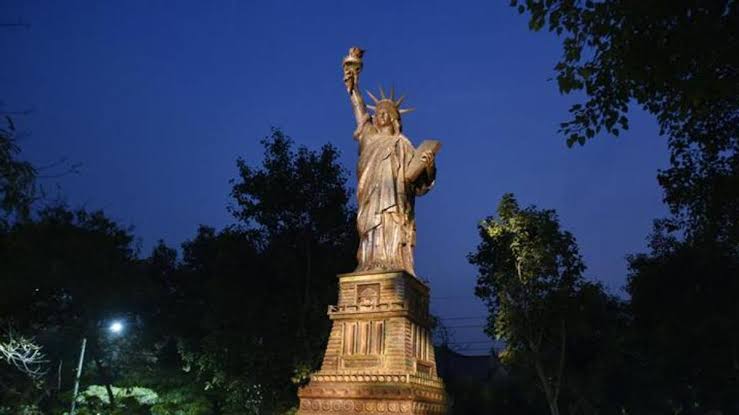 Approximately 7-8 tonnes of waste material has been used to create it. The pedestal of the Statue of Liberty replica is created with old piles, metal railings as well as angles that give a look of bricks, circular rings have been created using the car rims. In the left hand of the statue, the Roman liberty goddess is holding a tablet that has been carved from a bench of the Municipal Corporation of Delhi and metal sheets. In the right hand, she is holding a torch that has been made up of old bikes and its chain. Her hairs have been made using the chains of cycles. 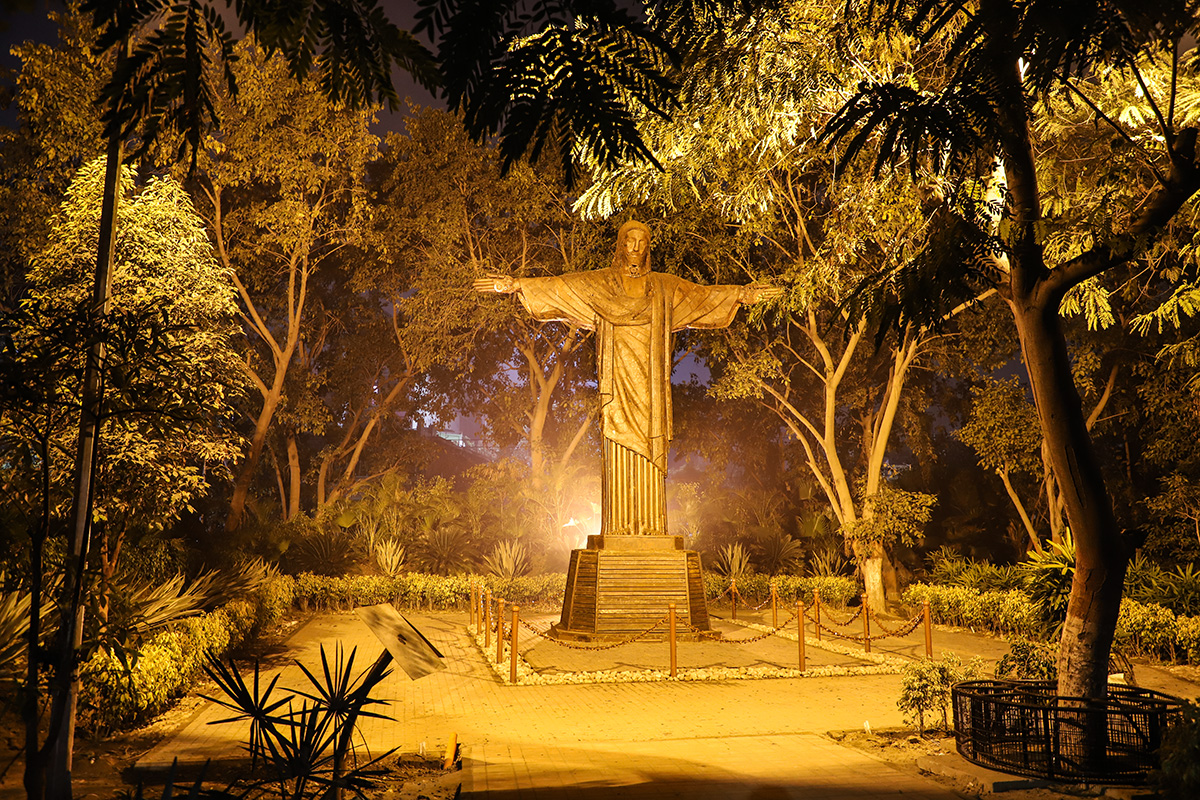 Approximately 40 tonnes of waste material has been used to create it. The structure of the Replica of the Eiffel tower is 70 feet tall. It has been made up of wrought-iron lattice along with several other automobile wastes such as trucks, clutch plates, C channels, etc. Three floors have been created for the replica which has been created separately but then were assembled together using a crane.

5.Replica of the Colosseum from Rome 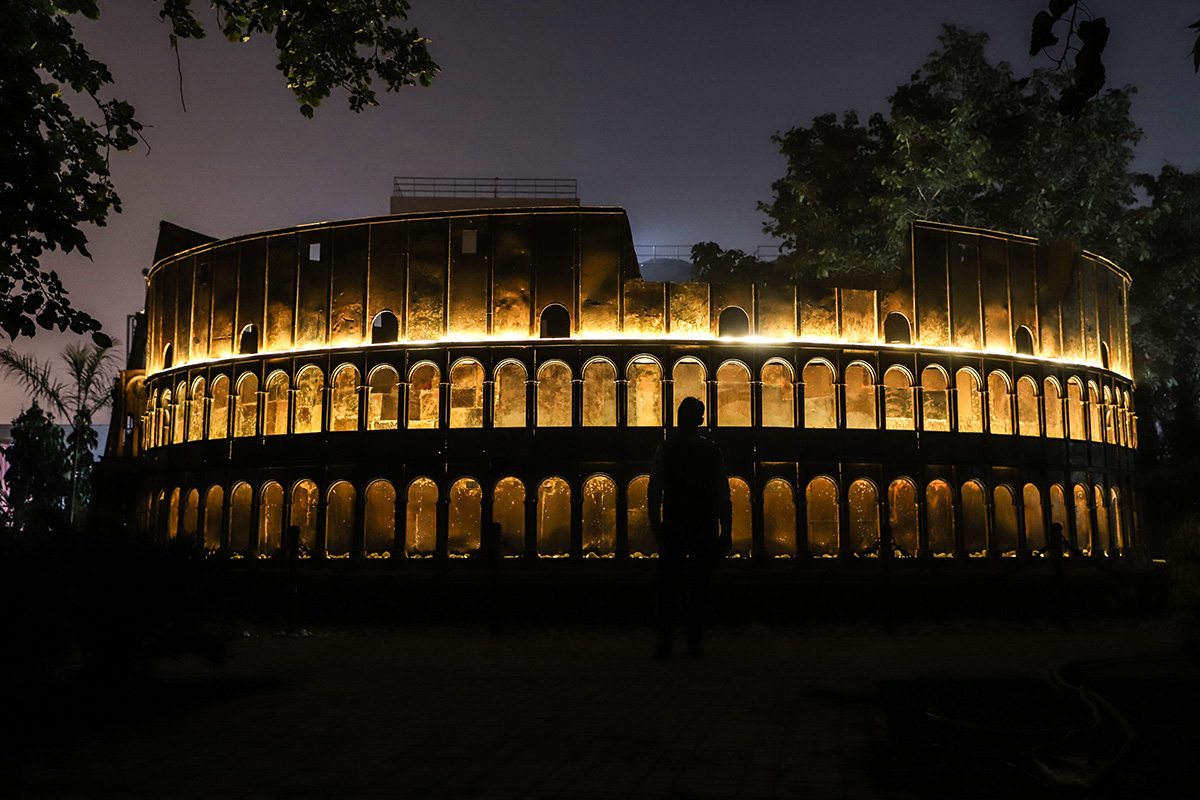 Approximately 11 tonnes of Waste material has been used to create it. The Colosseum of Rome is the largest stone amphitheater in the world. It was developed by the Emperor Vespasian of the Dynasty of Flavian in the 70-72 A.D. 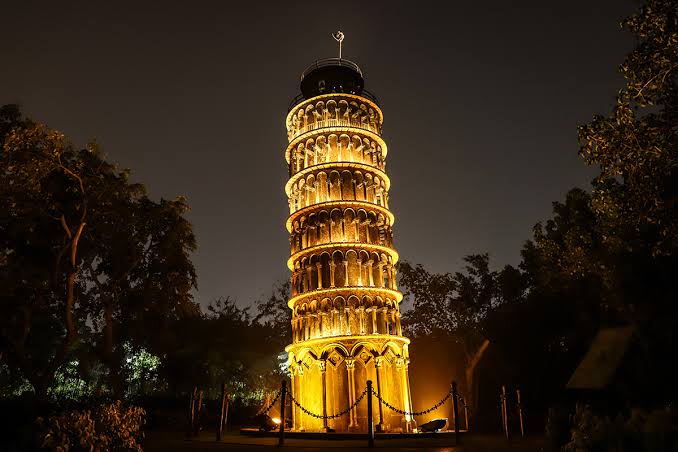 Approximately 10.5 tonnes of Waste material has been used to create it. The Leaning Tower of Pisa in Italy was constructed in the 12th century. The replica of the Pisa Tower is made up of around 211 arches that have been spread out in eight storeys. These are fabricated from the rims of cycles. Between the arches, diamond designs have been made using the metal sheets as well as the pipes so that it looks like a pillar.

Approximately 10-12 tonnes of Waste material has been used to create it. It is a known fact that the Great Pyramid of Giza is the oldest wonder of the seven wonders of the world. In the replica of the pyramid, about 110 layers of the structure were generated using approx 10,800 feet scrap angles that weighed around 10-12 tonnes.