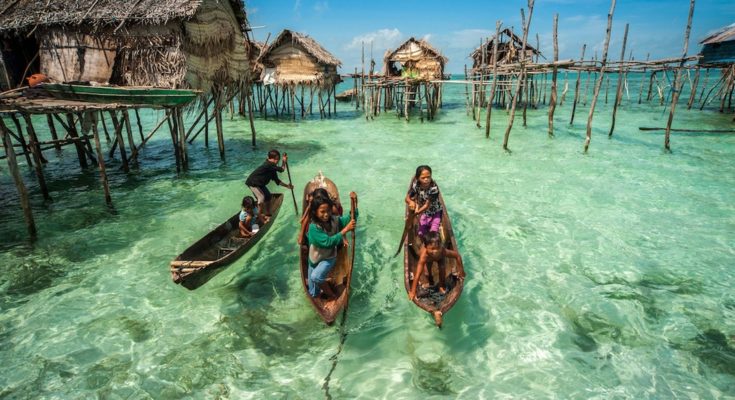 Can you imagine living literally on the water the whole time? Yes, were not talking about fishes, sea turtles or any other marine organism. Were actually talking about real humans out here!Bajaus are a unique tribe, to say the least. Their lives originate and end in the realms of the blue and wet. Since time immemorial, this special clan of people has made the sea their true home.

Let us explore more about the one of its kind, mystical Bajaus.

The Bajaus are a part of a larger clan called the Sama-Bajau. The origins of Sama-Bajau traditionally are traced to the Archipelago in the Philippines, Mindanao coasts, Borneo, the Celebes, and Indonesian islands.Most of these were native to the sea-dwelling lifestyles. They were thus called the Sea Nomads or Sea Gypsies. However, many of them with time started moving to land too.However, today the term Bajau is referred to those who primarily are still water-residing. Theyre estimated to have a 1 million + population. How did these people land on the sea in the first place?

This unfortunately still remains a topic of contention. Different historical accounts bring to the table distinct stories.One such story suggests that centuries ago, the Bajaus were subjects of the ruling Kings daughter. When the princess was swept away by the mighty storming sea, the Bajaus were ordered to go find her. They couldnt return back empty-handed. This resulted in the Bajau to move to the sea as a nomad.Many mythological references also debate about the real origin behind these sea-dwelling humans.Nevertheless, whatever might be the actual story; the Bajaus are very much a part of our reality. To experience them is being introduced to another completely different world. The distinct world of Bajaus

Originating from the islands of the Philippines, they dispersed outwards. Today they reside off the coast of Malaysia in the shallow waters.The outward spread of the Sama-Bajau tribes to places beyond where they traditionally lived, has been due to the trade of sea cucumber. Sea cucumbers are a delicacy only found on the ocean floors. These have been traded by the Bajaus since time immemorial now.Bajaus daily routines are anything but normal. They essentially live on handmade houseboats and travel in the same. The boats are typically 5m long and 1.5m wide. Everyday supplies are adorned in the boat such as a kerosene lamp, potted plants, utensils and jerry cans.Or they construct wooden huts on long stilts standing deep in the water. Living in the water, of course, means leading extremely simple lives, just like their ancestors.Their entire life revolves around the marine ecosystem. They live off the sea by fishing and hunting. The Bajaus very seldom set foot on land with some of them actually never leaving the blue. They go to the nearby town of Semporna to trade seafood for rice, drinking water, and other staples. Seafood, pearls, and sea-cucumbers are found again in the deep expanses. Thus Bajaus are excellent divers.The Bajau children, in fact, are known to rupture their eardrums quite early on in childhood. Extreme free diving causes the ears and nose to bleed. However, post this the Bajaus can live pain-free.In fact, many of the older Bajaus are recorded to have hearing issues. It is but a natural output of spending all your time in the water.Bajaus dont even differentiate each other based on age. Youre allowed to feel as young as youd like and as youre at heart.The Bajaus have been revered for their intimate relationship with the sea. In fact, at a point, they were patronized by the Malay Sultans for setting up trade routes.

They follow Islam plus animalism when it comes to religion. They believe there are spirits in the waves, tides, mangroves, and the corals.

Did you know that the Bajaus are actually a marginalized group? Since the olden times, they have the status of nomads or refugees. Thus they do not possess the citizenship and protection of any country. Due to their traditional status as outsiders Malaysia to doesnt allow Bajaus to enter the territory.The children, in fact, have no scope of going to a formal school. Malaysian schools require a Malaysian ID card of the students. So instead of learning maths, English or science, the children are taught how to swim and dive from a very early age. Their childhood involves learning how to hunt and make boats.

Bajaus sentiments on being on their own

The Bajaus seem quite indifferent to all the above. The clan is reasonably happy and satisfied with their living conditions. They take pride in how theyre still giving birth in the same waters which were inhabited by their ancestors once upon a time.In fact, Bajaus consider living in the marine ecosystem as essentially being themselves. It is theirs chose to live like nomads in the middle of the oceans.

Behavioral adaptations of the Bajaus

The unique hydro-lives of the clan have resulted in key adaptations. Specific behavioral traits have been adopted by the Bajaus.For instance, children themselves get too accustomed to the sea-centered lifestyle. In fact, theyre able to see more clearly underwater rather than on land!The Bajaus, in general, have learned to measure time by evaluating the position of the tidal waves and their movements. They dont know how to read and write, but what they do know is how to be attuned to the signals of nature. Remember feeling sea-sick when on that speedboat/cruise in your last coastal vacay? Well, wondering what the Bajaus would be feeling in that case...always dwelling in the deep expanses of the sea? They feel quite the opposite of what you must be getting to. Yes, it is not the sea that makes the Bajaus sick but the land! Bajaus feel land sickness when away from the sea even for short whiles. Talk about insane adaptations...Wait this is not all! Actual biological adaptations have also been scientifically recorded.As we know, Bajaus mainly depend on seafood hunting and trading for livelihood. Most of the seafood lies on the ocean floors. Bajaus thus dive up to 200 feet + deep below the ocean's surface in order to hunt.Normally human beings, when completely underwater are able to hold their breaths for a matter of seconds. Or sometimes even for a few minutes. However the Bajaus free dive to a level which is totally unheard of and shocking.They can dive and stay submerged for 13+ minutes at one go. And at depths of 200 + feet! Oxygen tanks and life jackets are so overrated. All the Bajaus use when gliding deep down is a weight belt, pair of self-carved glass goggles, and a wooden mask.Realizations such as these resulted in much speculation and got scientists thinking.

The biological genetic adaptation of Bajaus

One key diving response is the activation of our spleens. The spleens are like storehouses of excess oxygen for times when our body lacks the same. Biological tests by Dr. LLardo of Copenhagen University have shown significant differences between the spleens of Bajaus and us:The Bajaus have considerably larger spleens which help them to stay underwater for much longer. This natural bodily adaptation has happened over the years due to the excessive diving the clan partakes in.Experiments have also confirmed that the spleens of non-diving and diving Bajaus are similar. In both cases larger than that of other humans. Thus the increase in spleen size has been an overall adaptation for the entire Bajau population.Tests showed that in comparison to a nearby land-based community of farmers, the Bajaus had spleens almost 50% larger in size!Bajaus significance in understanding genetic adaptation and the potential dangers to the tribe.The Bajaus are not only interesting to learn about. Theyre significant for enhancing knowledge on genetic human adaptations.They throw light on how we as creatures are able to adapt to our surroundings. This includes not only behaviourally but also physically. LLardo believes that we can lose out on a treasure-house of valuable information if Bajaus are left unsupported.Since the Bajaus are wholly unprotected, they face adverse dangers. The ocean is dominated by pirates who can harm these vulnerable sets. Minimal policing and one of the most dangerous waters to survive in, the Bajaus are left to run away unharmed.Moreover, due to industrial fishing techniques and depleting food supplies, the Bajaus are gradually decreasing in number. The children of Bajau since having no access to education can never have the choice to leave. They shall continue to live like how theyre taught to. However, it's essential to impart knowledge to them about basic hygiene.The conditions are not at all apt. The situation might need urgent intervention to save this unique clan of Earths inhabitants.