Bhangarh Fort | Visit the most haunted place of India in Rajasthan

The Bhangarh Fort located in the Alwar district of Rajasthan, at the border of the Sariska Tiger Reserve, passing by the Ajabgarh fort. The Bhangarh Fort is known as one of the most haunted places in the world. We have heard many haunted stories of the Bhangarh fort that are fascinating to hear about.

The Bhangarh Fort located in the Alwar district of Rajasthan, at the border of the Sariska Tiger Reserve, passing by the Ajabgarh fort. The Bhangarh Fort is known as one of the most haunted places in the world. We have heard many haunted stories of the Bhangarh fort that are fascinating to hear about.

The fort of Bhangarh has been built by the Kachwaha ruler of Amber, Raja Bhagwant Singh. He got this built for his younger son Madho Singh in the year 1573 AD. The famous Man Singh was Madho Singh’s brother who was Akbar’s general. Madho Singh had been succeeded by his son Chatr Singh. Ajab Singh, the son of Chatr Singh had built the Ajabgarh Fort.

There are several Bhangarh Fort haunted stories that have been reported over a long time. The Locals of the place call this the ‘bhoot Bangla’ or the haunted house. They even claim that the palace has a lot of paranormal activity inside. It has also been rumored that Ghosts and ghouls roam around the Bhangarh fort, with a strange noise.

The locals of the place say that the spirit that haunts the palace and the surrounding areas is the spirit of the magician Singhia who will only rid itself it when the princess returns to the palace. The beautiful princess Ratnavati,  the daughter of Chatr Singh was the jewel of Rajasthan.

Ratnavati was younger than her stepbrother Ajab Singh. She was very popular because of her beauty and kind behavior. Also, the princess had received several proposals for marriage. There was a Tantrik priest who had been well versed in the study of black magic and he fell in love with the princess.

Although Ratnavati got to know of this and threw the bottle away which had changed into a boulder and hit the Tantrik. He got crushed under the weight of it. Before his death, the Tantrik had cursed the princess, her family, and the whole village. The next year there was a battle fought between Bhangarh and Ajabgarh leading to the death of the Princess and the army.

This curse is the reason why no one could be reborn in the village or the Fort. It has been condemned to desolation and has been inhabited by ghosts. This is just one of the two stories that exist behind the destruction of the Bhangarh Fort.

The other story that has been told included a sadhu, Guru Balu Nath. He had been living on the top of the hill where Raja Bhagwant Singh had built the fort. The Sadhu gave a condition for letting the construction of the Fort to begin, it was that the Fort should never cast a shadow on his place. Everybody had accepted this condition except Maharaja Ajab Singh.

He ended up adding columns to the fort because of which there appeared a shadow on the Sadhu's dwelling. This made the Sadhu angry and he cursed it. Due to this, there was a ruin of the Fort as well as the nearby villages. Guru Balu Nath had cursed the village that it will remain roofless. Till now, if a roof is built anywhere, it gets collapsed soon.

There were jauhri bazaars and the houses for the dancing girls also known as the Nachni ki Haveli. You will also find some huge banyan trees. The gateway to the fort is also impressive. The Fort had three big stories even though the fort was in ruins. The village also has the Someshwara temple at the side. The temple also has a beautiful stepwell.  The steps, as well as the top of the fort, are in ruins with the broken columns, stones, and a carved niche, that is said to have been Ratnavati’s toilette. Although, the walls inside the temple are still intact.

The entry has been prohibited into Bhangarh between the time of sunset and sunrise. The Bhangarh Fort has been ranked as the most haunted fort in the country. Still, the local guards have never accepted the fact that any paranormal activities take place there.

Once you reach near the fort, you will find a tin and wood hoarding by the Archaeological Survey of India (ASI) which reads:

"No vehicles are permitted to enter the fort beyond this point. Failure to comply with this instruction can have serious legal consequences."

After parking your car or any other vehicle outside, you will find another hoarding at a distance that reads:

"It is forbidden to enter borders of the haunted Bhangarh Fort before sunrise and after sunset."

These warnings about taking legal action against those who violate the guidelines are not just based on the rumors. But several people have claimed that they have heard a lot of noises from the Bhangarh fort of ghosts screaming, voices of women crying, the sound of bangles clinking in the rooms, and others. It has also been reported that there have been Ghostly shadows, strange lights, and scary sounds of music and dance. It has also been found that those who had dared to go into the fort after sunset did not live to see the next day.

The best time to visit the Fort is during the months of September till February. This is because the area of Bhangarh is very hot during the summer season.

It has been prohibited to roam around the fort and surrounding areas during the sunset hours as per the orders of the ASI. 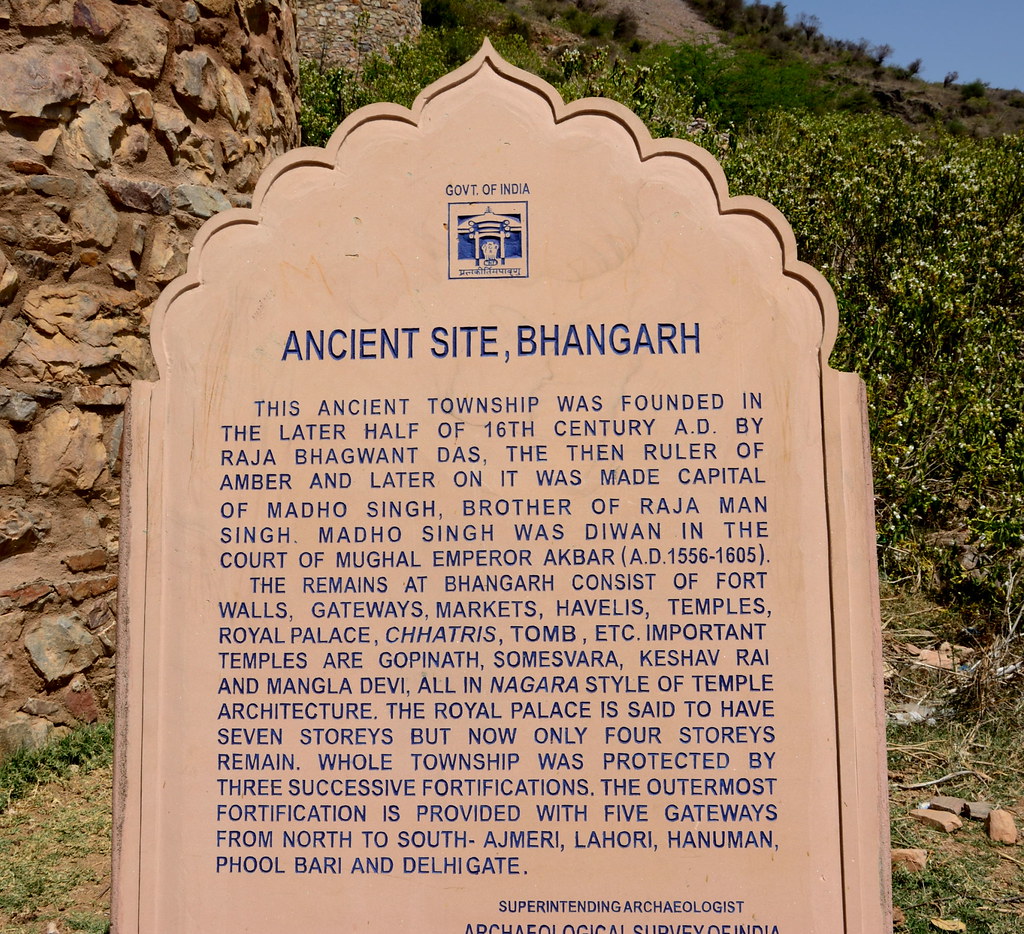 The entry for the foreigners to the Bhangarh fort is Free. It is free for the Indians as well but they will charge a fee of INR 25 for using the Video Camera.

How To Reach the Bhangarh Fort

Alwar is the nearest town to Bhangarh. It is located 90 km away from Bhangarh. Taxis and buses are available from Alwar to Bhangarh

Bhangarh is located at a distance of 269 km from Delhi via the Neemrana route. It is located at a distance of 242 km via the Alwar route. It will be about 4 to 5 hours of driving from Delhi to Bhangarh. When returning, it is recommended that you should return via the Alwar route and explore the Sariska Tiger Reserve as well as the Alwar Fort on your way back to Delhi.

If you live all the haunted stories about the Bhangarh Fort and want to experience the thrill in real, then you should definitely come here to explore the most haunted place in India. It ain't for the faint-hearted. Although, it has not been said that these stories are 100 percent true but why not find it out by visiting there.