Delhi Republic Day Parade 2023- A Complete Guide you should know

Through internet broadcasting, every Indian would be able to take in the majestic beauty of the Republic Day Parade 2023 from the comfort of their own homes. The live streams will be freely available through a number of sites. The great celebrations of the event can be seen by visiting the official website at https://indianrdc.mod.gov.in/. Additionally, Doordarshan and the Press Bureau of India will also live-stream the parade.

An online "Invitation Management Portal" called "Aamantran" has been launched by the central government. The recently introduced platform will assist in facilitating easy public access to the Parade. It is intended to invite guests and dignitaries online. The website allows users to easily purchase online booking for the Republic Day Parade 2023. The official ticket-buying website is located at www.aamantran.mod.gov.in.

Like every year, Prime Minister Narendra Modi will visit the Amar Jawan Jyoti before the Republic Day Parade 2023 livestream broadcast kicks off at 9:30 AM from Kartavya Path (Rajpath). President Droupadi Murmu will later unveil the flag.

The Main Attendee at Republic Day 2023

Abdel Fattah El-Sisi, the president of Egypt, will be the featured guest at this year's Republic Day Celebration. Republic Day 2023 will focus on "Nari Shakti," or "Women Power."

What location is the beginning of the Republic Day Parade 2023?

The huge parade that marches down Rajpath in New Delhi on January 26 is practically associated with Republic Day 2023 celebrations in India. From Rashtrapati Bhawan, the parade marches down Rajpath to India Gate, then continues on to the Red Fort. The president of India lifts the national flag to signal the beginning of the more than five-kilometer-long procession.

How to book online tickets for the 74th Republic Day Parade 2023 step-by-step:

Visit the "Aamantran" webpage at www.aamantran.mod.gov.in.

Make an account on the platform by entering your mobile number.

Fill out the search query and the information about the attendees of the program.

Authenticate with the One-Time Password that was provided to the registered phone number.

Complete the necessary fields, then pay the fee.

Tickets are sent through the website to registered email addresses or registered cellphone numbers via SMS.

The authorities will scan each ticket's distinctive QR code before allowing entry to the parade's location. One contact number may be used to reserve a maximum of 10 tickets.

The government will put up actual booths where people can buy tickets.

From 9:00 am onwards, the Republic Day Parade will be live streamed on several social media sites. 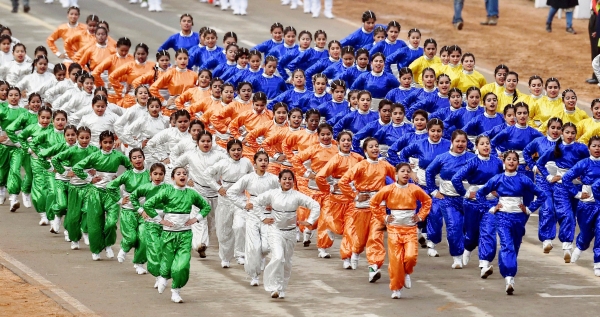 In order to cultivate the spirit of "Ek Bharat Shreshtha Bharat," more than 1200 performers have been sharpening their skills. They will engage the audience with a combination of India's unique culture and customs.

The "Military Tattoo & Tribal Dance" program, which will be held on January 23–24 this year, is likewise being organized collaboratively by the Ministries of Defense and Tribal Affairs, with the Indian Coast Guard functioning as the organizing body.

To celebrate Netaji Subhas Chandra Bose's 126th birthday, commonly known as "Parakram Diwas," and as part of the Republic Day celebrations in 2023, the event is being organized.

These organizations and initiatives are coordinated by the Ministry of Tribal Affairs. The "Adi-Shaurya: Parv Parakram Kain" performances will take place at the JawaharLal Nehru Stadium in New Delhi from January 23 to January 24, 2023.

During the event's grand finale, legendary Bollywood playback vocalist Kailash Kher will perform. The event's goals seem to be to honor the nation's brave souls and pay tribute to its rich cultural legacy, which contributes to India's uniqueness and diversity. The goal is to remember Netaji Subhas Chandra Bose's bravery as a nation, to embrace India's genuine spirit, and to reaffirm our commitment to creating a powerful and wealthy "New India." The event is being jointly organized by the Ministries of Defense and Tribal Affairs, with the Indian Coast Guard serving as the organizing body.

What will be the 2023 Republic Day concept?

The government has recommended three specific concepts for the tableaux of the 2023 Republic Day Parade: India@75, the International Year of Millets, and Nari Shakti, as stated by an official source.

Several state governments, central ministries, and departments, according to insiders, have been given the opportunity to participate in the Republic Day Parade on January 26 by developing a scenario using one of these three themes, or a mix of the three.

The government has suggested that India@75 tableaux highlight India's freedom movement, its accomplishments, its deeds, and its commitment throughout the previous seven decades. This is in honor of India marking 75 years since its freedom.