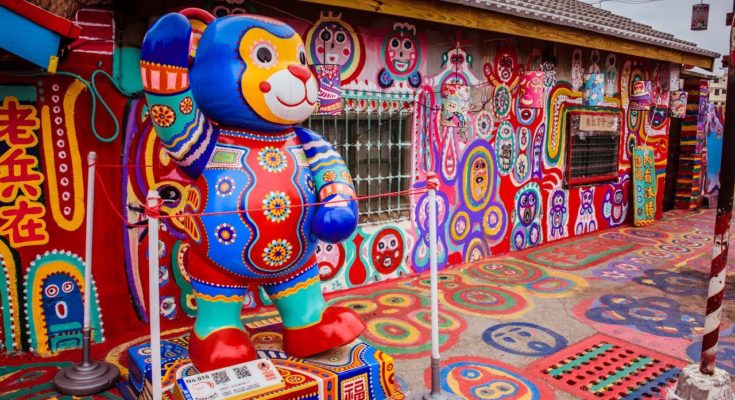 When we say Rainbow, we paint our mind with vibrant hues. The title itself is an ambiguous idea, thats how a village is named as Rainbow Village. Does this village offer the mind-numbing sight of Rainbow? No, these all ideas are not clear. This Rainbow Village is located in the Nantun district of Taichung, Taiwan. The village is an amalgamation of vivid small single story houses located amid tall and dull buildings. The village came to be known as Rainbow Village because the creator of this village Mr. Huang Yung-Fu has transformed the houses of this small village by painting it with different colors stemming from the whole spectrum of the rainbow.Also read:-The First Game of Thrones-themed ice hotel in the world

In Taiwan, small Veteran villages are scattered in some areas. The houses in these villages are made up of low-cost material. Generally, these houses are meant to provide the accommodation to the Kuomintang soldiers, and their families, after they retreated from Mainland China. Rainbow Village in Taichung. In the last two decades these villages have been disappearing, one by one. The Government has handed the land to building companies. The building companies promised to provide new apartments to the families of surviving Veterans. The houses were already torn down by the Government.Huang Yung-fu is the last resident of the village. One day he started to paint the empty and dying village. He started painting animals, dolls, airplanes with vibrant colors. Each and every wall and alleys were painted. Ling Tung University students discovered the paintings of the village. This university is located near the Village. The university students protested against the demolishing of the village. The painted murals became the attraction of the tourists. After the protest and the rising popularity of the village, the Government postponed the demolishing of the village.

How to Reach Rainbow Village

To get to the Rainbow Village, travelers can take buses number 27 and 40 from Taichung Train Station to Lin Tung University; fares range around 40 NTD (approximately 1.30 USD). From there, walk straight along Lingdong Road toward the south for about 5 minutes. Taxi is also another option for those who dont have a lot of time, but the cost would depend on your starting point and would be more expensive than the bus fare. Attractions of the Rainbow Village

Do not expect the Rainbow village as a fairy tale village. It is an ordinary village with a lot of extraordinary paintings by a 93-year-old military veteran. When the Government sent the letters to the villagers asking them to evacuate, he might have taken the money and left the village. But in order to save his own village, which, he called as his real home in Taiwan, he put down his knees to paint the empty village and made possible the survival of the old veteran village.Also read:-Being a Vegetarian in ChinaToday also he wakes up at 3:00 am in the morning and starts his painting. He spends four hours every day daubing the walls of the small settlement with colorful figures, from birds and animals to celebrity singers and sportsmen. His artwork has kept the village safe as the surrounding area has been flattened. Due to his colorful paintings all over the village, he is popularly known as Rainbow Grandpa. His knee bandages are bruised due to spending too much time kneeling on the ground to paint.However, he is still continuing his effort by adding vibrant murals that decorate the walls and pathways of the veterans village or Juan cun as a way to ensure its survival.Huang has lived in this village for 37 years and continued even his neighbors abandoned their homes and only 11 houses remained. That is when he decided to paint. He had learned painting from his father when he was only five years old. Huang has decorated his two-bedroom bungalow, the outer walls and the empty neighboring homes with the paintings of dogs, cats, planes and his favorite celebrities, including kung fu legend Bruce Lee. The government has promised him they will keep this house and this village, Huang is very thankful to the Government. Huangs work quickly received a lot of attention, and his village became one of the most visited touristic attractions in Taichung. The maintenance of this painted village needs a lot of effort.This village is not a big site, but strolling the lanes of the Rainbow Village will give you a feeling of immense creativity and passion a man can have to save his village. However, this place is worth visiting even for just an hour, walk along the walls and take time to appreciate the vibrant creatures painted by the Huang.Apart from taking pictures at this Rainbow Village the tourists get the chance to meet the living legend Grandpa Huang. He is usually present in the village. The Rainbow Village is having a souvenirs shop which his run by Huangs grandson. This shop sells the artwork of Mr. Huang. The shop offers T-shirts, pins, mugs, postcards, and many more for purchase to support Grandpa Huang. The Rainbow Village is having a street singer too. He usually sings to entertain the travelers. But he is quite different from other street artists. Whatever the weather, he is constantly seen in a brightly colored suit, which almost makes him as colorful as the walls, and an Ironman mask. Travelers are welcome to take pictures with him during his breaks; there are colorful ukuleles, wigs, and giant sunglasses for those who want to spice up the photo.Rainbow Village is one of the prime tourist attractions of Taiwan. The nonprofessional painter has turned the dying village into lively with high vibrant painting and rainbow colors. Traveling is to discover and embrace stories from many sides of the world, which includes this unique and vibrant village. As small as it may be, this art site is indeed proof of creativity and passion. The Rainbow Village is a well-known destination for both domestic and international travelers mainly because of the bright colors and unique drawings on the walls.Also read:-Top Places to visit in China