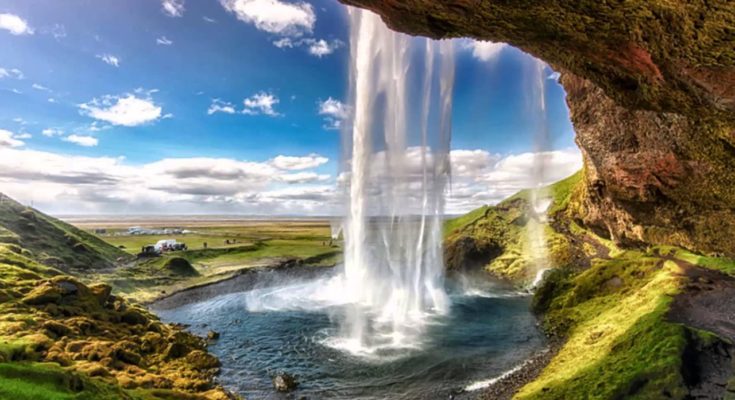 Top 10 biggest and greatest waterfalls of the world!

Cover Stories Feb-28-2018 by Aksha Pathak
Waterfalls are giant and magnificent geographic features. The loud and thunderous voice of the water hitting and spilling on the edge of the cliff and the view which never ceases to be exciting and grand. Today we have composed a list of worlds 10 biggest and greatest waterfalls which will surely leave you wanting to visit each and every one of them.IGUAZU FALLSStanding between the border of Brazil and Argentina, this is probably the greatest waterfall of all times. It is a system which comprises of 275 falls that go along with the river Iguazu. The average of all the falls would be approximately 64 meters (210 ft) in height. But the things that separate it from the other falls is the Devils Throat. This is a U-shaped 82-meter-high (269 ft), 150 meters (492 ft) wide and 700 meters (2300 ft) long waterfall.

VICTORIA FALLSWhile the natives call it Mosi-oa-Tunya meaning The Smoke That Thunders, Victoria Falls is situated between the borders of Zimbabwe and Zambia. This is also called the largest waterfall of the world often even though it is not the highest or the longest waterfall. It is approximately twice the size of Niagara Falls with a width of 1.7 kilometers (1 mile) and height of 108 meters (360 ft). NIAGARA FALLSProbably the most famous waterfall of the world, Niagara lies in between the twin cities of Niagara Falls, Ontario, and Niagara Falls, New York. But did you know this huge waterfall is actually a combination of 3 waterfalls? Namely the American Falls, Bridal Veil Falls and Horseshoe Falls. The Niagara Falls is also the worlds most visited tourist attraction with more than 14 million people visiting it worldwide on an average. ANGEL FALLSThe worlds highest waterfall is the Angel Falls. It has a height of 978 meters. It falls from the summit of the Auyan Tepuy, and then it has an 807meters uninterrupted drop. Because of its location which is in the isolated and secluded jungle regions of Venezuela, the only access to it is by air through the gates of the Canaima National Park. KAIETEUR FALLSKaieteur Falls is one of the worlds most powerful waterfalls. Its average speed is 663 cubic meters per second (23,400 cubic feet per second) and it has a free fall height of 226 meters (741 feet). Located in the heart of Guyanas rainforest it is located on the Potaro River. This waterfall is a combination of both height and power in one as it is five times the height of Niagara Falls and about twice the height of Victoria Falls. GULLFOSSWith a name that roughly translates to golden falls, Gullfoss is a double waterfall on the White River. Its height is 32 meters high and is one of the greatest attractions in Iceland. During summertime, the flow of the rivers from regular rains and the glacial runoff makes it the most voluminous waterfalls of Europe. JOG FALLSJog falls lies in India. It is created by the River Sharavathi. With a height of 253 meters (829 feet), it is the highest waterfalls in India. Although before the rains it is just two thin lines falling down through a cliff, but when the monsoon season arrives the waterfall is at its grandest and even leaves the Kaieteur Falls in Guyana behind in terms of power, volume, and height. PLITVICE WATERFALLSProbably one of the most beautiful waterfalls of the world, this is the link between 16 lakes of Plitvice Lakes National Park. This is the reason it is the most attractive and popular tourist destinations of Croatia. It lies between the hills covered with the forest near the Bosnian border. The small streams, lakes, and waterfalls fall into an alluring water. The government has provided the park with plank walks, bridges and platforms to make it more accessible and easier for the public. There is also free boat rides for the people to take them to higher or lower lakes. YOSEMITE FALLSThis is the tallest waterfall in the United States. Yosemite Falls drops into three cascades and provides a beautiful view from various locations of the Yosemite National Park. Tourists can indulge in an all-day hike which will take them to submit for panoramic vistas of the grand and royal park along with the huge Sierra Mountains beyond. The best time to visit this place is the month of spring after the cold winters. DETIFOSSDetifoss is Europes strongest waterfall. It is known for the enormous volume it maintains all the year round. It is situated towards the Northeastern parts of Iceland in the Vatnajkull National Park. The majestic waterfall can be viewed from either side of the river River Jkuls Fjllum that falls into the canyon below. The river is equipped with many facilities but it can get very slippery when it is fully crowded during the tourist season. Stay tuned for more such articles!